My first peer-reviewed article about poetry off the page has just been published. I am very, very excited!

I wrote an article about ‘viral poems’ for a special issue of the journal Performance Research ‘on annotations’. How do poems go viral? And how are these poems annotated by people online and offline? 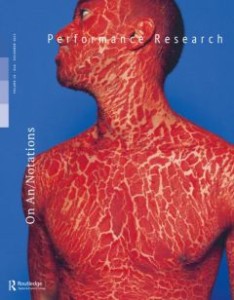 My case study is the poem ‘OCD’ by the American poet Neil Hilborn, which went viral in the summer of 2013 and has been viewed more than 10 million times on YouTube. I referred to so many YouTube videos, blogs and other websites that Performance Research included a special QR-code at the bottom of my article.

Here’s the abstract of my article:

In “How viral poems are annotated. On ‘OCD’ by Neil Hilborn” Kila van der Starre explores how, where and by whom viral poems are annotated. The article focuses on the performance of the poem ‘OCD’ by Neil Hilborn which went viral in the summer of 2013 and has been viewed more than 10 million times on YouTube. Researching online poetry performances and annotations can be seen as a new type of literary reception study in the digital age. It shows that poetry in the twenty-first century is a widespread, actively experienced and annotated, transmedia genre in what Henry Jenkins calls ‘convergence culture’.

The performance of ‘OCD’ triggered a broad array of reactions, including oral, written, creative, analytical, applauding and critical annotations. The video received more than 9000 comments on YouTube from 130 countries and the poem was translated into at least thirteen languages. People used self-made films with actors, drawings, stop-motion techniques, footage montage and voice-overs to produce adaptations of the poem. Probably the most common annotation to the performance is a video in which a ‘cover’ performance of the poem is recorded; on stage for a live audience, in the original language or in translation, in the US, France, Germany, Servia and more.

The way Hilborn’s poem is transcribed, translated, adapted, remade, remixed and analysed gives us insight in how people experience and understand poetry. Also, the ways in which online and offline annotations coincide give an alternative view on the idea that print and digital media are separate tracks that do not interact. By focusing on different types of annotations Van der Starre explores the ways in which active participants are ‘making meaning’ of the performance. The article shows how emotion, identification, translation, genre, authenticity, analysis and interpretation play a role in the way people experience and understand the poem.

If you have access to online academic articles via your university, you can probably read my publication online.